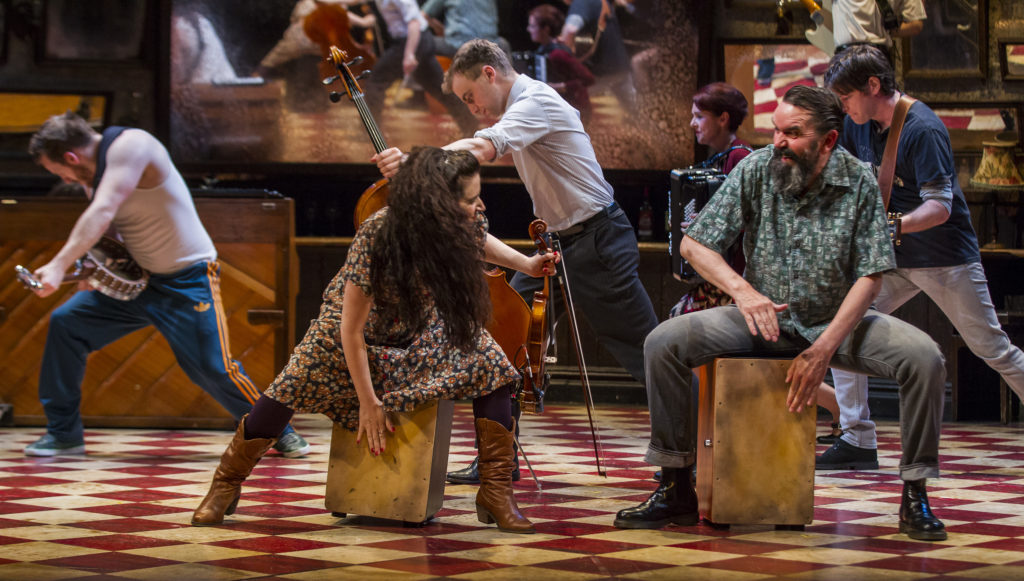 It was seen by over 50,000 people when it played at the Olympia Theatre last summer. Now, due to phenomenal demand, the record-breaking stage show Once returns to the Olympia Theatre, Dublin for 8 weeks only in summer 2016.
Described as a ‘love-song to Dublin’, the stunning music is performed by an extraordinary cast of actor-musicians, who sing, dance and play their hearts out live on stage. Between them, the 12 actors play 30 instruments during each performance, making Once a unique show that has the feel of a play and a music gig combined.
They include Sam Cieri as Guy, Megan Riordan as Girl, Sandra Dowd Callaghan as Baruska, Phelim Drew as Billy, Lisa Fox as Ex-Girfriend, Turloch Gunawardhana as Emcee, Bob Kelly as Eamon, Michael Mahony as Bank Manager, Bill Murphy as Da, Rickie O’Neill as Svec, Dylan Reid as Andrej and Ruth Westley as Reza.
Producers are delighted to welcome Sam Cieri as Guy to Dublin’s Olympia Theatre. Currently touring the US in the lead role of Guy, Sam said: “Coming to Ireland has always been a dream of mine. This show is a love letter to Dublin and to be a part of that is an overwhelming and humbling experience. After watching the film Once, I was inspired by Glen Hansard to busk in the New York Subway. Now, just a few years later, to find myself on stage in Dublin performing in the role of Guy is a dream come true.
Once is a funny, moving and life-affirming love story with glorious music that has captured hearts around the world. Seeing it where it all began, at home in Dublin, is very special. Based on the movie sensation of the same name, filmed and set in Dublin, it features music and lyrics by Glen Hansard and Markéta Irglová and a Tony award-winning book by Enda Walsh. The show has all the magical songs from the much-loved film, including the Oscar-winning Falling Slowly.
Once is about the power of music to connect us. See it at home in Dublin’s Olympia Theatre from 2 July – 27 August, 2016.
VIDEO
Watch the trailer for Once this summer at the Olympia Theatre  http://oncemusical.ie/video/
PRAISE FOR ONCE
★★★★ ‘winning… the music is the show’s trump card’   The Irish Times
★★★★ ‘hysterically funny… truly uplifting’   Irish Daily Mail
★★★★ ‘noisier, bawdier and funnier than the film’ Irish Mail on Sunday
★★★★ ‘gorgeous… a masterclass… exquisite’   The Herald
‘brilliantly adapted… ingeniously staged… hilarious’ Sunday Times
‘stellar… exceptional… a must-see’ Hot Press
DATES & BOOKING INFORMATION
Venue: The Olympia Theatre, Dublin
Dates: 2 July – 27 August, 2016
Mon – Saturday 8pm & matinees Saturday 3pm
Booking Information
Tickets from €29.50 on sale now
Tel: 0818 719 300 | http://www.ticketmaster.ie/Once-the-Musical-Dublin-tickets/artist/1978797
Phone & internet bookings subject to 12.5% service charge per ticket (Max €6.10), agents €2.15 per ticket