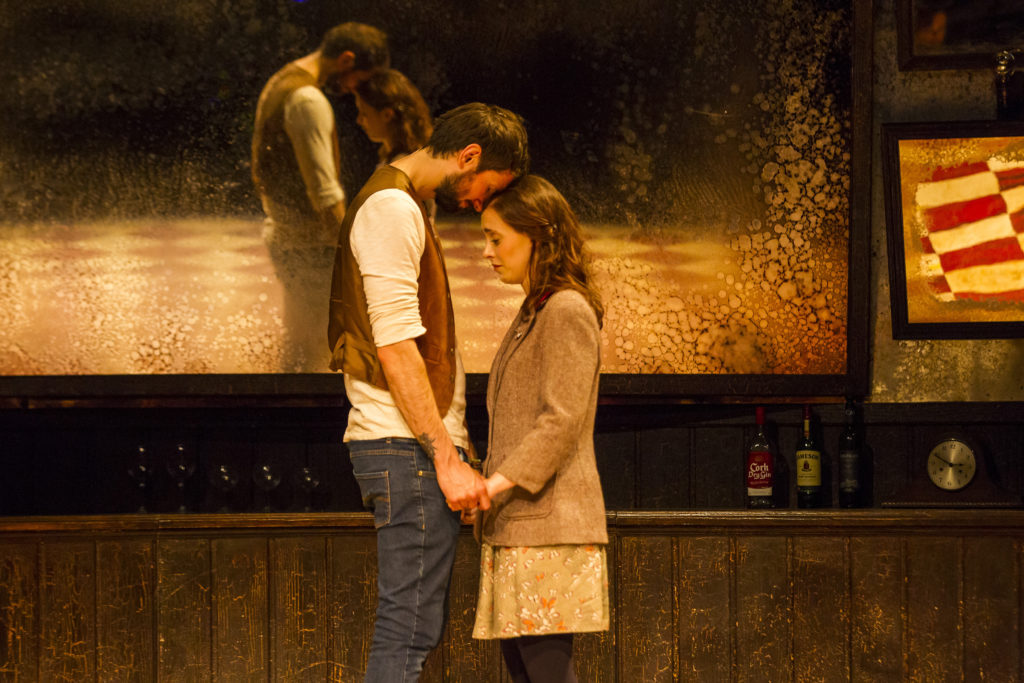 ONCE THE MUSICAL COMES HOME

Having taken Broadway by a storm and picked up eight Tony Awards in 2012, ‘Once’ made a wonderful debut in Dublin’s Olympia Theatre last night. Based on John Carney’s 2007 Academy Award winning film, ‘Once’, this adaptation by Enda Walsh only adds to the magic of the original. Starring Tom Parsons and Megan Riordan, the pair re-ignite and expand the chemistry crafted by Glen Hansard and Marketa Irglova, while the surrounding cast and set captures the simplicity of the love-story plot.

With the cast already onstage before the audience even enters the theatre, it’s impossible not to become engrossed in the actions of the play almost immediately. As members of the crowd gradually clear the stage, a vibrant and bustling trad session gives way to a poignant performance of ‘Raglan Road’ by Bill Murphy who plays ‘Da’. It’s not long before the ‘Guy’ and ‘Girl’ figures cross paths in the authentic pub surroundings allowing the events of the musical to unfold in a truly unique fashion. The minimalist stage is the musical’s most flexible prop allowing the set to transform into a pub, a shop floor, a living room, a recording studio, a sea front and a bank manager’s office with the help of our imagination.

The versatile cast are a stellar asset to ‘Once’. Not only can they act and sing to exceptional standard, it’s not out of place for them to dance, skip and jump across the stage while playing a range of instruments from mandolins and violins to guitars and drums. Riordan and Parsons excel in carving out an inviting modern fairy-tale, while the clever glimpses of hands and faces we receive from different angles and mirrors add a sense of authenticity and realism to the musical.

Phelim Drew is a stand-out performance as music shop owner, Billy, his true North Dublin grit shining through, leaving the audience in stitches throughout. As to be expected the Grammy award-winning, ‘Falling Slowly’ is an out-standing moment in the musical, Parson’s gravely vocals juxtaposing wonderfully with Riordan’s tender tones, leading to a well-deserved three encores for the cast upon its close.

A truly delightful and inspiring show, hilarious without bordering on cheesy, ‘Once’ is a must-see for all ages, capturing the light and character of Dublin people from all background’s and cultures.