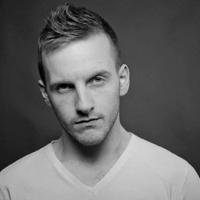 Rickie is from Mayo and took a keen interest in music from an early age. At the age of 9 he found his musical home behind a drum kit and has been busy performing ever since.
Rickie played in various groups throughout his teens and in 2011 joined The Saw Doctors as their full-time drummer. Since joining The Saw Doctors, Rickie has toured extensively including tours in America, the UK and Saudi Arabia.
Theatre includes: Conrade in Much Ado about Nothing (The Iveagh Gardens, A Fortune’s Fool Productions); tour of Germany with The Wild Shamrock Touring Theatre, performing 34 shows over 29 days.
Film and Television includes: Rickie’s TV debut was in a McDonalds ad in 2012. He has done a voice over for Electric Ireland for the Minor Championships which will air for another two years.